Barack Obama joined Twitter in 2007, which makes him the first head of state to have a Twitter account; however, now this is common practice. Even in countries like Iran, where Twitter is regularly blocked, the president, Hassan Rouhani, maintains a Twitter account in English and Persian. While some leaders still do not have Twitter, it is far more popular now than it was in 2007, and world leaders are learning to use the social media platform in new ways. Two projects listed in the Net Data Directory are collecting and sharing data about how politicians and governments use Twitter.

Twiplomacy, a tool developed by public relations firm Burson-Marsteller, tracks the ways heads of state and state departments utilize social media, with a focus on Twitter. The Twiplomacy website contains an interactive map; users can click on each continent for a list of facts on social media use or select a country to see the most popular government accounts in that country and how each one uses Twitter. This interactive map enables users to compare and contrast the different Twitter strategies of leaders in each country. For example, smaller countries often have different strategies for engaging followers on Twitter than larger ones might. In Iceland, 94% of the Twitter traffic comes from abroad; therefore, the government made the decision to tweet in English to better engage with its followers.

Each year Twiplomacy reports highlights and new trends on Twitter. In the most recent report, Twiplomacy featured the first politicians to use Emojis on Twitter (Juan Manuel Santos, president of Colombia, and Julie Bishop, an Australian MP), the governments that pay for Twitter advertisements (Japan and Monaco), and the foreign officials Barack Obama follows (Dmitry Medvedev, Malcom Turnbull, and Erna Solberg). Twiplomacy also reports on broader trends across Twitter. Twiplomacy found that for heads of state, Twitter is still a predominantly text-based social network, though some official accounts are tweeting GIFs and using new video tools like Periscope or Vine. Predictably, tweets with images or video often perform better, but Twiplomacy also noted that many of the highest performing tweets occurred during tragedies. That said, tragedies are not always the best time to tweet; one particularly poorly timed tweet occurred when “The U.S. Mission in the Philippines had scheduled a post about an invitation to a garden party at the mission while a tropical cyclone was wreaking havoc in the country.”

Sometimes, governments, foreign offices and politicians try to delete tweets like these in an effort to cover up any mishaps. Politwoops, a site from the Sunlight Foundation in the United States and the Open State Foundation in the European Union, catalogues these deleted tweets. The popular website uses Twitter’s API to track and publish deleted tweets from government officials. In an interview with the Internet Monitor, Nicko Margolies, Politwoops Project Lead at the Sunlight Foundation, explained the process: after receiving a notification of a deleted tweet through the API, Politwoops  “would compare it to the public feed of the politician to see if it was a minor error that was corrected and if not, it would be approved to appear in Politwoop’s archive.” The site was met with some resistance in mid-2015 when Twitter restricted use of the API, but by the end of 2015, Politwoops and Twitter were able to reach an agreement, which allowed the site to return. In addition to displaying the tweets on its website, Politwoops displays how long it took for each politician to delete the tweet in question. One of the most famous deletions happened in 2014, when Sergeant Bowe Bergdahl returned to the United States after the Taliban held him captive for five years. Bergdahl’s return was complicated because of both the decisions he made that led to his capture and the prisoner exchange that led to his return.  Many Republican lawmakers initially tweeted their relief and happiness for Bergdahl’s release, but once they found out about the prisoner exchange with the Taliban, they quickly deleted these tweets. 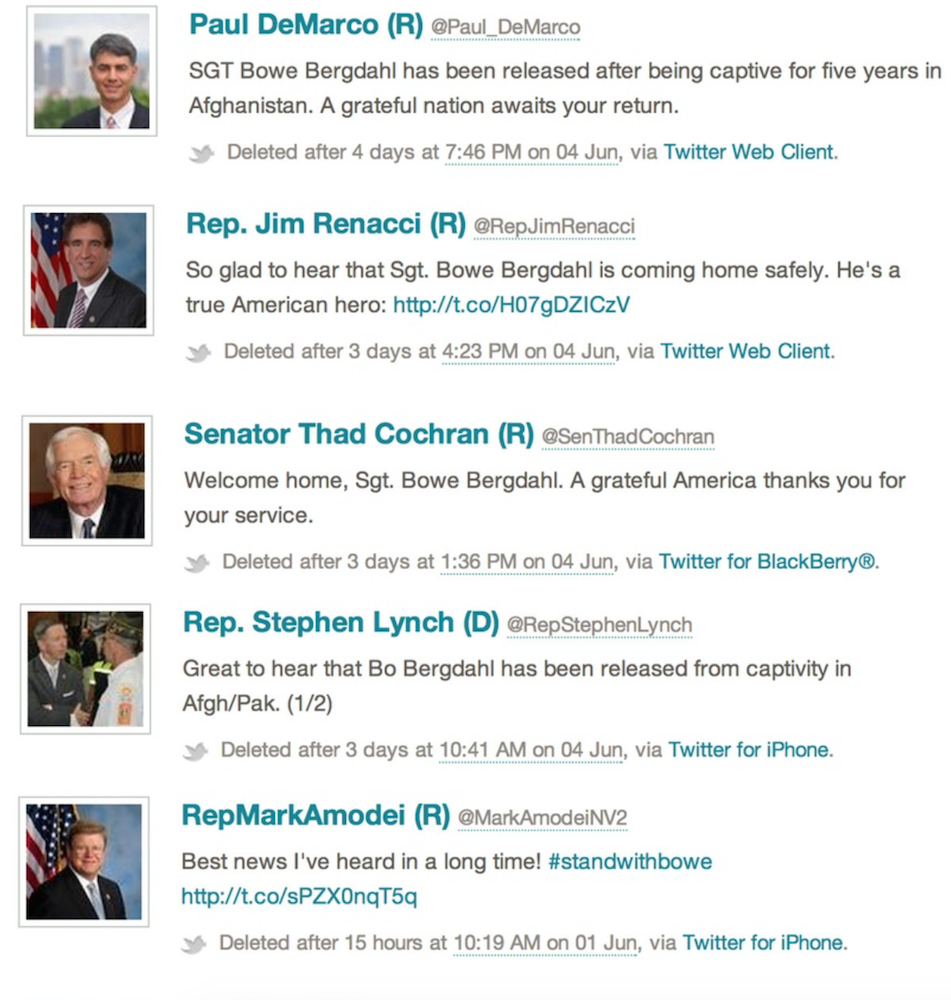 Both Twiplomacy and Politwoops are located in the Net Data directory and can be incredibly useful to see how politicians have used—or in some cases, struggled to use—Twitter effectively.